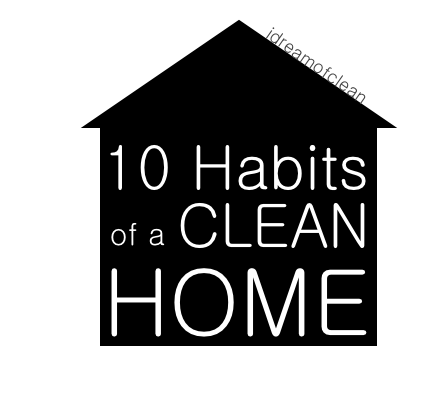 Several years ago I was on the flylady email list and the first thing I learned was to “shine your sink” every night. (Unfortunately, that’s as far as I got with the flylady. Maybe I should try again!) Anyway, the shine your sink concept is a great habit to begin! Every night take five minutes to clean your kitchen completely. Put dirty dishes in the dishwasher, clean off the counters, and scrub and dry your sink until it’s shiny.

2. Wash One Load of Laundry Daily.

Instead of waiting until the weekend to wash several loads of laundry, get in the habit of washing one load every day. As soon as you wake up, put a load of laundry in the washing machine. As soon as it’s finished (that’s the hard part for me!), transfer the load to the dryer. Hopefully it will be finished by the time you leave for the day! When you get home, fold and put away the clothes.
You may need to modify the routine if you’re worried about your clothes getting wrinkled or you have more or less than seven loads of laundry every week. Just make adjustments and find a way to make laundry part of your daily routine.

Go through your mail daily. As you walk in the door, open all envelopes, throw away or shred junk mail, and put bills and other action items in your command center.

A command center is an area in your home that can be used as a catch all for items that need to be processed (i.e. bills that need to be paid, cards to send out, etc.). It’s also a place that can house items that need to be picked up quickly as you walk out the door like keys, bags, and phones. Some also benefit for having a calendar in this area. Customize the command center to fit your family and life!
Throwing away your trash seems so simple right? But, how many times have you (or someone in your family) taken something out of a package and put the package on the counter beside you? Or, maybe you’ve taken tags off clothes and just placed them on the dresser instead of the trashcan? Instead of waiting until later, just take a few extra seconds and immediately throw away trash in the trashcan.

6. Straighten Up Every Night.

Waking up to a clean home can make the start of your day more pleasing and productive. Take a few minutes each night to pick up around the house. It doesn’t have to be spotless, but straightening up nightly helps to keep the mess from becoming overwhelming.

Depending on your personality, a cleaning schedule can be as detailed or scaled down as you want it. You may want to clean bathrooms on Monday, mop and vacuum floors on Tuesday, dust on Wednesday, cut the yard on Thursday, and something else on Friday. Or you may prefer to do everything on the weekend. In either situation, a plan will help you move through the list much more quickly. Just like other areas in life, a plan will encourage, motivate, and enable you to reach your goal for a clean home.

Reducing clutter reduces stress. You’ll have less to clean, less to pick up, and less to maintain. You may even be able to live in a smaller house! Or at least not feel like you have to move into a bigger one.

Sometimes the list of household projects can seem so overwhelming. If you have a list of 10 things that you need to replace, build, or update, just pick one thing to complete. Then do one thing that will move you closer to finishing that project. For example, if you need to organize your closet, start with your pants. Then move onto skirts the next day, and tops the following day. Break down a large project by just doing one thing. More examples can be found in my Do One Thing series.

Yes, a junk drawer is a must for a clean home. In some cases, a cabinet or closet may be more reasonable! Having a place to store random items that don’t have a home can be so freeing. Plus, when you’re in a hurry, sometimes it’s just easier to dump everything into one place. Of course, the only downfall is that you must clean it out periodically!